List of sixteen "medicaments" such as rhubarb, tamarind, gum arabic, manna, vitriolic acid, Spanish Fly etc. and their quantities "judged necessary for the treatment of the disease that has stricken our brothers-in-arms from the district of Sauveterre". The document was issued by the revolutionary "Commission de Santé" and signed by five of its members, including the chemist and physician Claude-Louis Berthollet (1748-1822) and the surgeon Antoine Dubois (1756-1837). Formed by nine to twelve medical officers, the commission was created by the "loi du 3 ventôse an II" (22 February 1794) as part of the ministry of war. Both Berthollet and Dubois later served during the French campaign in Egypt and co-founded the "Institut d'Égypte" in 1798. On 26 May 1808 Dubois was named consulting surgeon to the Emperor and in 1811 he was chosen to deliver the son of Napoleon and his wife Empress Marie Louise of Austria. Berthollet saw an equally stellar career under Napoleon in view of his important contributions to chemistry.

Somewhat stained and with traces of old repairs. Several pin holes to the lower left corner and tears to the right border. 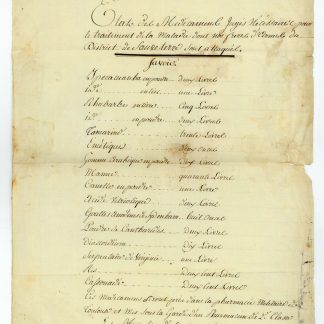