The most significant early book on probability - Charlier copy

First edition of "Bernoulli's most original work [... and his] most famous single writing" (DSB). the "establishment of the fundamental principles of the calculus of probabilities" (Grolier/Horblit). "Jakob Bernoulli's posthumous treatise, edited by his nephew [Nicholas I Bernoulli], (the title literally means "the art of [dice] throwing") was the first significant book on probability theory: it set forth the fundamental principles of the calculus of probabilities and contained the first suggestion that the theory could extend beyond the boundaries of mathematics to apply to civic, moral and economic affairs. The work is divided into four parts, the first a commentary on Huygens's 'De ratiociniis in ludo aleae' (1657), the second a treatise on permutations (a term Bernoulli invented) and combinations, containing the Bernoulli numbers, and the third an application of the theory of combinations to various games of chance. The fourth and most important part contains Bernoulli's philosophical thoughts on probability: probability as a measurable degree of certainty, necessity and chance, moral versus mathematical expectation, a priori and a posteriori probability, etc. It also contains his attempt to prove what is still called Bernoulli's Theorem: that if the number of trials is made large enough, then the probability that the result will lie between certain limits will be as great as desired" (Norman). This was the first statement of the law of large numbers.

Insignificant browning, more noticeable in title-page (with an old edge repair on verso); final leaf a little duststained in the margins. An excellent copy from the library of the Swedish astronomer and statistician Carl Vilhelm Ludwig Charlier (1862-1934) with his bookplate to front pastedown (overpasting an earlier Parisian printed bookseller's label). Charlier played a crucial role in the development of statistics in Swedish academia, and several of his pupils became statisticians. He also translated Newton's "Principia" into Swedish. 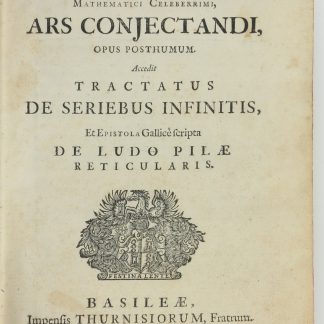