Extremely rare sole edition of this pamphlet describing a mythical 'Islamic' kingdom in Central Asia, home to a sect of pork-eating, wine-drinking apostates called Morabites. The newsletter claims to be presenting information gleaned from the reports of two missionaries; but like other such utopian/dystopian literature, the author's detailed account of this imagined society probably reflects the perceived shortcomings of his own society.

The center of the Morabite territory is said to be Mauranahar in Uzbekistan, and the author claims that the sect was founded by 'Mahomet Mohaidin', son of Hossein, grandson of Ali, and great-grandson of Mohammed, in the 700s, i.e., a century after the Sunni/Shia split. On pp. 6-8 we find several examples of the laws of this empire: "When it happens that one of our followers kills another, he will not die for it, because in that way the Republic loses two men; but he will receive a hundred lashes in front of the dead man's immediate heir, & will become his slave, labouring, & earning for his master, so that the loss from death might be compensated". Other regulations pertain to theft; religious apostasy; extra-marital affairs; relations with non-Muslim women (a man caught with a Christian woman must bathe himself six times in the presence of an Imam; but if caught with a Jew he must bathe three times in strong vinegar!); and the surprising allowance of pork and wine to Mohaidin's followers. A description of a festive procession representing the principal tenets of the Mohaidin sect is found on pp. 9-11, including "in fifth place a figure of Mohammed, founder of all Mohammedan laws, mounted on a richly dressed camel". At the end of the text, the author reports that all over Asia, neighbouring kingdoms are watching the Morabites closely and preparing to make war on them.

Not to be confused with Moabites, the legend of the Morabites seems to have circulated in Early Modern Europe among a credulous public. "The Dictionary of All Religions" (1704), for example, tells us that "the most Zealous of this Sect live in desart Places, like Monks, either alone, or in Company, and profess Moral Philosophy, observing many things contrary to Leschari's or Omar's Alcoran followed by the Turks: They live very licentiously, because they say, that having purified their Souls by Fasting and Prayer, it's lawful for them to enjoy the Creatures. At Festivals, and the Weddings of Great Men, they Dance and Sing Love Songs, till being weary they fall down with many Sighs and Tears [...]". Even in the late 19th century, McClintock and Strong's "Biblical Cyclopedia" repeated this description with little modification: "they live in sequestered places, like monks, either separately or in small communities; are very licentious in their habits, and follow many practices utterly opposed to the Koran".

OCLC shows just one copy worldwide, at the Newberry Library (attributing authorship to Mascarenhas); but we have traced two further copies at the National Library of Portugal. 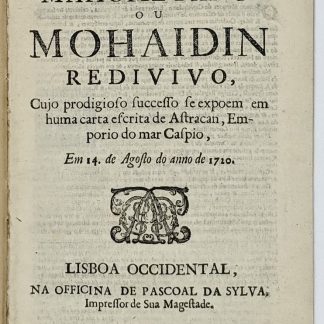