Thorough report on the U.S.-Saudi Arabian agreements regarding the mutual use of the port of Dammam and the airfield at Dhahran, close to the Aramco oil facilities. It was prepared for the International Cooperation Administration, an organization established in 1955 and responsible for all U.S. foreign assistance programs, except for military assistance, until its abolition by the Foreign Assistance Act of 1961, when its functions were transferred to the Agency for International Development.

The airfield had been built with U.S. assistance in the mid-1940s, and had for some time been operating as a civilian air terminal for Saudi Arabia. The agreement was renewed in April 1957, the same month the report was drawn up, with the understanding that the United States would provide funding and technical assistance to improve the airfield facilities as well as the port. The account is based on field reconnaissance of port congestion at Dammam, and a study of the need for a new airport terminal building development at Dhahran. It is divided into two parts, the first devoted to the port facilities, the second to the airfield facilities, both ranging from preliminary reports to appendices. The illustrations include photographic prints of Dammam main pier and the loading apron and passenger terminal at Dhahran, as well as a map of the air routes serving Dhahran airfield, construction plans both for the Dammam harbor, and the terminal building at Dhahran.

This report, along with a study of its background, provides a good introduction to post-war U.S.-Saudi relations, the impact of oil on foreign policy, and the expenditure of U.S. funds in the Middle East.

The enclosed copied letter of Thomas J. Murray, the project manager for Tudor Engineering, to his wife ("Dear Babe"), was written two days after drawing up the conclusions and recommendations for the project in April 1957. It is a personal account of his travels with the U.S. Ambassador and Special Assistant to President Eisenhower, James Prioleau Richards (the project was referred to as the 'Richards Mission'), to Riyadh to visit the King, the princes and various ministers, as well as the palace ("The inside of the palace is fabulous - it is something out of the Arabian Nights") and the city. He tells of receiving a solid gold wristwatch from the King and comments on the monarch's four wives, and on Arab women in general: "In all of our travels in this country, we have yet to see a woman's face".

Blue ink stamp "For official use only" to first and last few pages. Hinges and extremities slightly rubbed. A good copy of this rare report, undoubtedly published in a small print run. 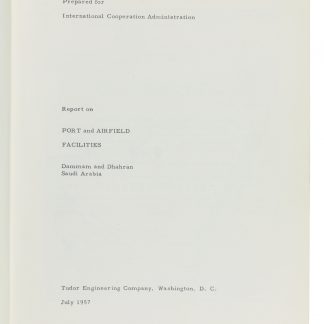