Substantial collection of friendly correspondence by various Middle East Airlines executives to the British aviation photographer and journalist John Stroud (1919-2007). Among the more notable items is a letter from Sheikh Najib Alamuddin, Managing Director of MEA, expressing his appreciation for Stroud's work. The bulk of the correspondence was composed by Cyril Essely, Deputy General Manager, who elaborates on the company's activities, as well as family affairs, discussing their struggle to maintain service at a time of political unrest across the Middle East in the 1950s: "I have written to London to see if something can still be got in the press about MEA not having broken off its European service [...] and still continuing to operate regularly. As soon as we resume our services within the Middle East I will specifically ask London to get news in the daily press" (13 Nov. 1956).

In addition, the archive comprises a set of striking photographs which Stroud likely intended for the illustration of his articles in the aviation press. They show Hawker Siddely aircraft operated by Iraqi Airways, Kuwait Airways, Middle East Airlines, United Arab Airlines, and Gulf Aviation, on the runway as well as in mid-flight, and the Misr Air building in Cairo. The earliest items in the collection are two photographs showing the De Havilland DH.80 Puss Moth, one of the fastest private planes of its day, flying over Palestine in 1932.

Some letters with small edge flaws. Very well preserved material from the career of an aviation expert involved with promoting Middle Eastern airlines in the West. 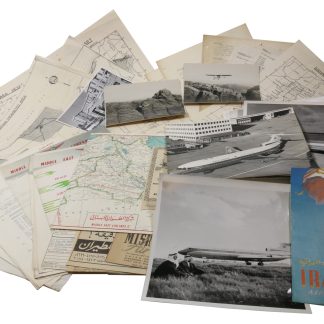