235 x 286 mm. Mounted on cardboard. With an autograph letter signed by Victor Beuttell (see below).

Alan Turing attended Sherborne School from 1926 to 1931 and made an impression the moment he started his school career by cycling the 65 miles to the school from Southampton (where he had arrived from his parents' house in France during the General Strike), via an overnight stop at Blandford Forum, a feat that made the local paper. As his school reports reveal he showed "considerable promise" but his masters often complained that he failed to express himself adequately - his physics master Henry Shorland Gervis urged, "Cambridge will want sound knowledge rather than vague ideas". Other influential figures at Sherborne were his mathematics tutors Dr Edwin Davis and Donald Eperson, who instilled in the boys a love of problem solving and puzzles. Turing the schoolboy appears to have been an eccentric character but by no means the reclusive loner as he is sometimes portrayed: "At Sherborne he became the 'Mathematician-in-ordinary' who would help boys with their homework, and in his penultimate term at Sherborne his housemaster wrote in this school report that 'He takes a fatherly interest in his dormitory, and no doubt imparts his learning and curiosity to them" (Rachel Hassall, Vivat! Sherborne School magazine). This photograph was taken in July 1930 just six months after the sudden death of Turing's great friend Christopher Morcom - an event, it has been argued, that became the catalyst for his future achievements.

One of the boys he helped was Victor Beuttell, son of the British inventor Alfred William Beuttell, three years his junior, who mentions Turing three times in his letter home. Drawn together by a mutual sympathy (Turing was grieving for Christopher Morcom and Beuttell's mother was terminally ill), they were given special dispensation by the housemaster to spend time together. Victor was "also one who neither conformed, nor rebelled, but dodged the system" (Hodges, A., Alan Turing: The Enigma, 2014, p. 72), and they bonded over a love of codes and ciphers, inspired by the book 'Mathematical Recreations and Essays', which Turing had chosen as his Christopher Morcom Prize, awarded in 1930. He was obliged to leave the school in the same year as Turing after his father suffered financial losses and having failed the School Certificate, "telling Alan that it was because of too much time spent on chess and codes" (Hodges, p. 88) but they remained close. Victor was the one lasting friendship Turing retained from his time at Sherborne. Turing stayed with the family regularly and helped Victor's father Alfred with his work on lighting, with Victor in turn visiting Turing in Cambridge. Their last meeting was in 1943 when they met for lunch in London, but kept in touch for the remainder of Turing's life. Indeed, according to Victor's son, they spoke on the telephone just the night before he died in June 1954.

With an autograph letter from Victor Beuttell signed ("With heaps of love / Viccie") to his parents, reporting on his recent exam results and mentioning Turing several times ("On the additional maths [...] I think, and so does Turing that at the least I got passing marks. I didn't like the paper [...] Chemistry. According to Turing, got 70% an easy credit [...] Physics [...] By mistake did 6 questions instead of 5 [...] Even then I got a Pass according to Turing. Not so bad [...]"; 2 pages on 2 ff. on lined file paper, folio (325 x 210 mm), Westcott House, Sherborne, undated). 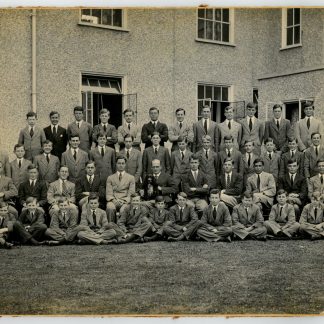