Philby, Harry St. John Bridger. Sheba's Daughters, Being a Record of Travel in Southern Arabia [...] With an appendix on the rock inscriptions by A. F. L. Beeston.

4to. XIX pp., one blank page, 485, (1) pp. With photographic frontispiece, 46 photographic plates (1 of which double-page), 1 folding map of southern Arabia, and several photographic illustrations in the text. Publisher's full cloth with giltstamped title and ornament to spine.

First edition. Travel account by the first European to cross the Rub' al-Khali (Empty Quarter) of Arabia from east to west, the Arabist, explorer, writer, and British colonial office intelligence officer St. John Philby (1885-1960), also known by his Arabian name "Sheikh Abdullah". Educated at Trinity College, Cambridge, he studied oriental languages and was a friend and classmate of Jawaharlal Nehru, later prime Minister of India. Philby settled in Jeddah and became famous as an international writer and explorer. He personally mapped on camelback what is now the Saudi-Yemeni border on the Rub' al Khali; in 1932, while searching for the lost city of Ubar, he was the first Westerner to visit and describe the Wabar craters. At this time, Philby also became Ibn Saud's chief adviser in dealing with the British Empire and Western powers. He converted to Islam in 1930. The personal contacts between the United States and Saudi Arabia were largely channeled through the person of Philby.

From the collection of the Dutch traveller and collector Ruud Verkerk. With 2 inserted colour photographs mounted on the plates facing p. 314 and 318, showing Verkerk standing beside rock inscriptions on the old fort at 'Uqla - south face, as well as standing before the Rock fort of 'Uqla, both dated in pencil 18 December 1997. Light damage to head of spine. Paper occasionally foxed and a slightly creased. Overall a good copy. 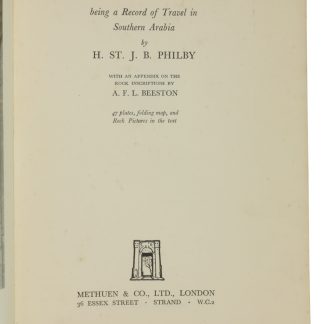