The first French edition to include a history of the English pirates, in a rare two-volume set published simultaneously with the more common four-volume edition. Considered "the prototype of an entire literature of books of adventures" (Church), Exquemelin's account of the customs and practices of the pirates includes a thorough description of the Caribbean. It was first published in Dutch in Amsterdam in 1678, by Thomas de Frontigniers, and saw Spanish, English and French translations as early as in the 17th century. A ship's surgeon in the service of privateers, the chemist Exquemelin (ca. 1645-1707) not only witnessed but also himself took part in several notorious pirate expeditions, such as that of the English buccaneer Henry Morgan ("John" in the book), including his raid on Maracaibo in 1669, and his 1670 attack on Panama. The second part of the second volume, a French version of an account of English pirates "by Captain Charles Johnson", had first appeared some twenty years earlier. It is a primary source of information on the piratesses Mary Read and Anne Bonny, and is believed by some to have been authored by Daniel Defoe.

Text complete in 2 volumes; lacks the 4 folding maps and plans. From the library of the marquis d'Héricourt, probably Bénigne Jerôme du Trousset d'Héricourt (1691-1779), with his bookplate to the front pastedown of the first volume. Occasional browning; vol. II, p. 247f. shows a large gluestain around a mended tear. In all a charming, appealingly bound set. 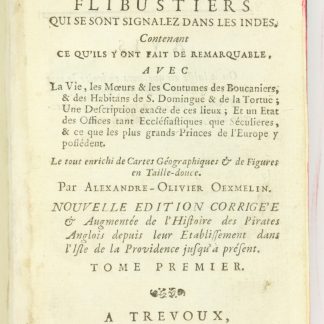