One of the founding documents of the 20th century's oil industry: the personal copy of Fuad Rouhani (1907-2004), later the first Secretary General of OPEC, with his autograph annotations and signature.

The historic agreement that provided Western oil companies with 50% ownership in Iranian oil production after its ratification in 1954. It expired in 1979. The agreement, which was heavily pressured by President Dwight D. Eisenhower, gave U.S. oil companies complete control over how much petroleum Iran pumped and the price it could sell for, and obliged Iran to compensate the AIOC with a sum of 25 million pounds - £15 million for the AIOC's loss of oil revenue from 1951 to 1954, and £10 million to transfer ownership to Iran of the Naft-e Shah oil fields, a small refinery in Kermanshah and domestic fuel distribution facilities.

Several marginal notes as well as 3 pp. of handwritten notes by Rouhani, listing the oil companies involved in the consortium, including references to later corporate developments such as the merger of Hancock Oil Company with Signal Oil and Gas Company in 1958. Rouhani, who was involved in the negotiations on behalf of Iran, was one of the founders of OPEC a few years later in 1961, and became OPEC's first Secretary General.

Extremities slightly rubbed, first leaf a little fingersoiled. A very good copy of the historic contract that overturned nationalization and placed control over Iran's oil in the hands of a group of international oil companies. 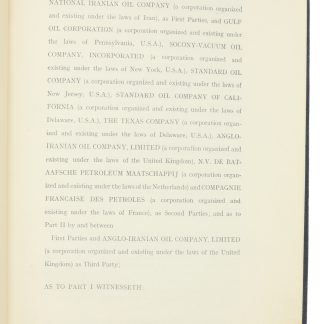