An antique map showing the East African coastline, extending from the mouth of the Red Sea to the Island of Zanzibar. The work was originally included in Karl Müller's "Geographi Graeci minores", along with many other maps of the region.

The map is highly detailed, showing many settlements, mountains, wadis, and more. The map is composed of four insets, with the largest focusing on the Somali coast. Most interestingly, Müller models one inset after a Greco-Roman periplus describing the western Indian Ocean. On this inset, Müller notes the travel times between adjacent ports, ostensibly following the notes in the periplus. 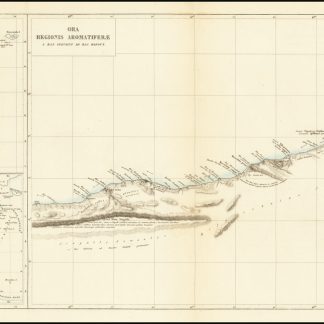