[Yemen]. Photograph album of a British soldier serving in the Aden Protectorate.

Various places, including Aden and Lahej, 1932.

Oblong 8vo. 38 original silver gelatin photographs, some window mounted and others pasted in. All with ink captions on the album pages. Contemporary turquoise cloth.

An apealing little album recording Aden and its environs. The images show well-documented features such as steamer point, the harbour and the British headquarters, and also more out-of-the-way scenes such as the football field ("a game at 115 degrees") and the remarkable trunk-like rock formation at Elephant Bay. Several venture inland to Lahej, capturing the camel market and the Sultan's palace. 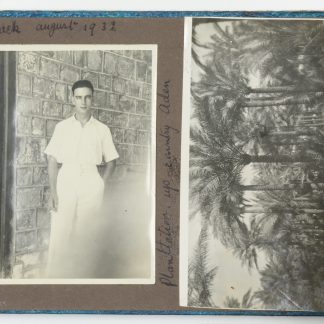 You're viewing: [Yemen]. Photograph album of a British soldier serving in the Aden Protectorate.Various places, including Aden and Lahej, 1932. € 1,500.00
Add to cart