First edition of Stamler's dramatic dialogue comparing the religions of the Tartars, Turks, Saracens and Jews, superbly illustrated by Hans Burgkmair. A prefatory letter contains a very early reference to Columbus and Vespucci.

Hans Burgkmair's magnificent woodcut is an ambitious attempt to reproduce the ideas of the author graphically: it shows a seated female figure representing the Church with the globe as a footstool; she sits before a tent, surrounded by the banners of the Papacy and the Empire. The Pope and Emperor kneel before her, and on a lower step sit four queens representing the four non-Christian religions, each bearing a banner with a broken staff. Below them are the figures of the disputants who take part in the dialogue: Dr. Oliverius, theologian; Balbus, historian; Rudolphus, a layman; Arnestes, an apostate; Samuel, a Jew; and Triphon, natural philosopher.

Burgkmair (1473-1531) was the foremost woodcut designer of the early 16th century in Augsburg and became the chief designer for most of Emperor Maximilian's print projects. "With the year 1508, which shows him at the full height of his power in separate woodcuts, Burgkmair's real period as an illustrator of books begins [...] The frontispiece of Stamler's 'Dialogus' shows an unusual delicacy of feeling in the rhythmical articulation and distribution of the masses and the way in which the difficult allegorical subject is controlled and visualized" (Rupe, "Hans Burgkmair as an Illustrator of Books", Print Quarterly 10.2 [1923], p. 177).

In a letter to Jacob Locher dated 1506 on fol. a3v, Stamler refers to the New World discoveries: "I do not make any mention of the newly discovered islands, but of Christopher Colom, their discoverer, and of Albericus Vespucius; on the discovery of the New World (to whom our age is chiefly indebted) behold what treatise I send you" (transl. from Latin). 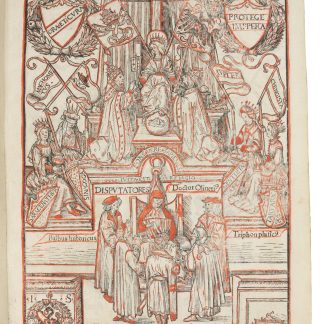