First edition. Exceedingly rare political brochure wherein Lenin advocates one of his key slogans: "The struggle for bread is the struggle for socialism". During a serious food crisis in the summer of 1918, involving suppliers hiding grain in an effort to starve out the revolution, Lenin calls for a crusade against grain speculators, wealthy peasants, exploiters and saboteurs. Delivered as a speech to the Central Committee.

Only a handful of copies traceable in libraries worldwide, none outside of the US or the UK. Not listed among Lenin's works in the otherwise thorough Marxists Internet Archive. 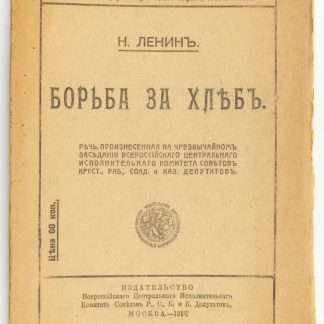