8vo (135 x 95 mm). (160) ff, signed a-v8 including terminal v8 blank. With large title-page woodcut of a physician in his study, surrounded by books and flasks, with a dog at his feet, as well as 65 half-page woodcuts of medicinal plants in text. Bound in early (possibly original) reverse white calf with remains of ties and faint inscription on fore-edge. Title within manuscript ruled borders, woodcut lightly hand-colored in yellow and red. Pastedowns using contemporary French manuscript material; further note in a French hand on verso of v8. A charming, unsophisticated copy in an early binding, well-preserved and entirely unrestored. Small pinhole in text of aii (mis-signed aiii), otherwise excellent. Later inscription at foot of title-page rather eccentrically suggesting Grenoble, 1522 as the place of publication.

Very rare early edition of this medieval herbal with the commentary of Guillaume Guéroult (d. 1559), a Professor of Medicine at the University of Caen. First printed in 1477 and first illustrated ca. 1495, Hunt calls the Macer Floridus "one of the earliest Western documents showing a revival of interest in botany" (I, p. 4), while Stillwell describes it as "the first printed herbal to relate solely to the medicinal properties of plants" (Awakening, p. 442). The title of the present redaction advertises the text as "Herbarum varias qui vis cognoscere vires" ('Various types of herbs of which you want to know the properties').

The first edition with Guéroult's commentary was printed at Caen in 1509 and is extremely rare. The Parisian Bacquelier brought out a handful of editions between ca. 1510 and 1522, but the present copy does not conform to any of the editions described by Renouard (#s 32, 35, 36), instead presenting a seemingly unrecorded colophon which fails to mention either the printer or the date. Later editions (e.g. Bacquelier, 1522) employ woodcut criblé initials, so we date this one to ca. 1515. "Es gibt verschiedene Ausgaben des Macer Floridus, die aus der gleichen Anzahl von 159 Blättern mit den Signaturen a-v bestehen. Obwohl sie sich sehr ähneln, sind sie nicht identisch" (Becher, Ein Katalog der frühen Kräuter, 65. 1). 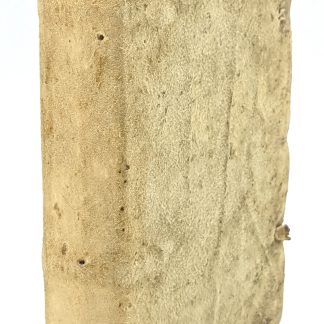