A fine copper-engraved portrait of the Persian Ambassador to the Holy Roman Empire. In fall 1603, soon after an embassy from Rudolf II had requested support in his struggle against the Ottomans in Hungary, Shah Abbas of Persia launched an attack against the eastern borders of the Ottoman Empire. So as to maintain close diplomatic relations with the Emperor during this long campaign, the Shah dispatched an ambassador to Prague, who posed, holding his pet falcon, for this portrait by Rudolf's court engraver. Aegidius Sadeler II (1568-1629) must have been intrigued by Persian script, though he had some difficulty engraving the inscription that identifies the sitter as an envoy of Shah Abbas. The calligraphic cluster at the left, representing the ambassador's name, could have been copied from his signet ring. 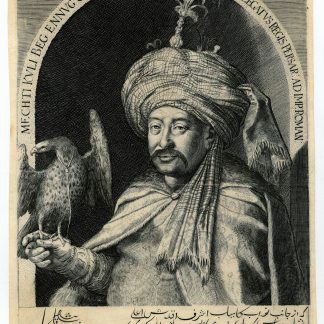