Beautiful calligraphy, apparently by two hands, of a eulogy for King Philip II of Spain, who had died at El Escorial near Madrid on 13 September 1598. Surprisingly, Philip's year of death is erroneously given as 1599 and his age as 72. The text focuses mostly on Spanish military achievements during Philip's reign, such as the Battle of St. Quentin against the French, which led to the Peace of Cateau-Cambrésis in 1559, successes in the Ottoman-Habsburg wars, the infamous Sack of Antwerp in 1576, which ultimately fueled the Dutch Revolt, and Philip's ascension to the Portuguese throne following the Battle of Alcântara (1580). His most important generals, the Duke of Alba and John of Austria, are personally mentioned. The bellicose theme of the eulogy is mirrored in the high-quality copper engraving of military trophies that frames the text. 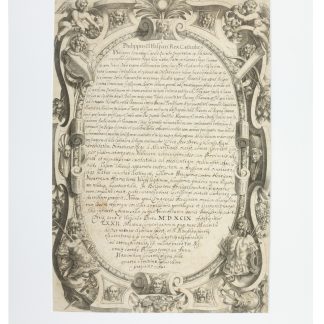