2) Bifolium [26 x 20 cm] on laid paper, watermarked with an unidentified two-letter monogram, with fair copies of the same Italian text repeated on each recto.

3) Single folio notepaper [19 x 13 cm] on laid, unwatermarked paper, with 1.5 pp of English text, headed "Proclamation to the Soldiers of the 7th Military Division". With a handful of corrections.

A remarkable assortment of contemporary manuscript ephemera relating to Napoleon's infamous escape from Elba on the night of 26 February 1815. Lapi, a medic by profession, had been secretly promoted to Brigadier General by Napoleon upon his departure. The present proclamation, dated the day after the escape, was probably intended to be copied and circulated in manuscript for the benefit of the inhabitants of Elba, and we have traced no record of its having been printed.

The text of Lapi's proclamation explains to the Elbans that he has been placed in charge of the island in Napoleon's stead, and exhorts them to keep order during the Emperor's absence. Marchand (1791-1876) was a 24-year-old devotee and valet-du-chambre of Napoleon, but issued his own proclamation as a 'Lieutenant General' - here rendered into slightly unidiomatic English by a contemporary hand. The text was meant to urge French soldiers to re-embrace their former leader:

"Soldiers, Bonaparte has landed on our coast, and advences [sic] into the interior of France. Let us Remember that he has disengaged us from our oaths, and that we have taken others to the king. You will be faithfull to Honour and to your Duty and this storm will be soon Dispersed. We will see then a beautifull Country be come Powerfull and happy. But if on the Contrary you suffer yourselves to be led by perfidious Councils every unhappiness will be thundred [sic] upon us. France will be again Invaded by Foreign armies, your Parents Pillaged, your villages ravaged, and our Enemies Divid among themselves our Country. Soldiers, you know your cheifs [sic], you know that they are incapable of conducting you otherwise than on the Road of Hoñor. Your cheifs [sic] have an entire confidence in you; Listen always to their vice [sic], and the Country will not be come a Prey to the Enemy. Signed the Lieutenant General Count Marchand".

The English docket inscription on Lapi's proclamation and the English translation of Marchand's proclamation strongly suggest that the present documents originated in the British commission resident on Elba, led by Colonel Neil Campbell. 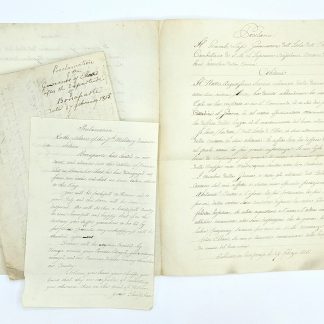