Tolstoy and his granddaughter in the year of his death

Tatiana Mikhailovna Sukhotina was aged 5 in 1910: she later married Leonardo Albertini, son of the celebrated newspaper editor and historian, Luigi Albertini. Her mother, Tatiana Lvovna Tolstaya (1864-1950), was Tolstoy's eldest daughter: she married Mikhail Sergeevich Sukhotin in 1899, in the face of her father's fierce opposition; she was later guardian of the museum at Yasnaya Polyana, and director of the Tolstoy Museum in Moscow in 1923-25, before emigrating to France and then Italy. Alexandra Tolstaya (1884-1979) was Tolstoy's youngest daughter, secretary and later executor: she emigrated to the United States in 1931. The photographer, Vladimir Grigorievich Chertkov (1854-1936), was a prominent Tolstoyan, and later became the writer's literary executor. He was by some accounts responsible for the rapid deterioration in Tolstoy's relationship with his wife, which culminated in his extraordinary escape from home immediately before his death at Astopovo railway station on 7/20 November, only six months after his inscription of this appealing portrait. 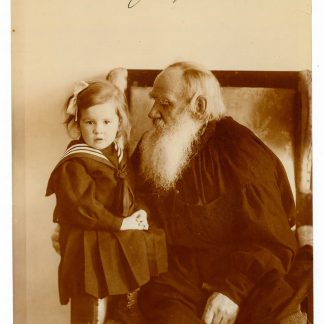