Historically significant letter written to defend himself against charges of espionage for the exiled Bourbons and their British allies. The letter was probably addressed to the military commission that had been installed in 1813 to try lieutenant Joseph Charabot, a central figure of the plot. Barras complains of having to defend himself against "allegations as disgusting as calumnious" made by a man who tries "disgracefully to ransom his life" by "spilling his own crimes" onto other people: "il m'est bien pénible Messieurs d'être obligé de me justifier d'imputations aussi degoûtantes que calumnieuses, d'un homme qui pour racheter honteusement sa vie, cherche à déverser ses propres délits sur des personnes qui comme moi ne l'ont jamais connu : je veux parle de Mr. Charabot fils". Barras admits that Charabot had visited him once or twice several years ago, but he underlines that there was no private contact and no exchange of money between them. The letter continues with short descriptions of Barras's relations to several of the accused. General Maximin-Joseph Emmanuel Guidal (1764-1812), who had been arrested on 22 January 1812, was the most important conspirator. During Malet's coup, Guidal was briefly released from prison on 23 October 1812. After the coup was quashed, Guidal was executed along 23 co-conspirators.

The affair of Marseille is little researched, and it is not known whether Paul Barras was an active participant in the conspiracy or not. The arrogant tone of this letter certainly would have done little to help his case, and it might have been merely his role in the ascent of Napoleon Bonaparte that saved his life, apart from an apparent lack of evidence. While Joseph Charabot was executed, Napoleon exiled Barras to Rome, from where he returned in the wake of the Bourbon Restoration.

Some browning and very slight foxing. 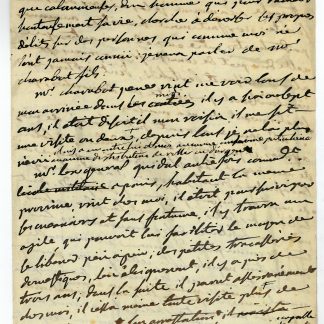