To the general and later Minister of War Henri-Jacques-Guillaume Clarke (1765-1818), announcing his sending a document via general Jacques-Pierre Orillard de Villemanzy (1751-1830) that Clarke "appeared to desire". Larrey's ultimate goal was for the document to be passed on to the "général en chef", Napoleon, who at the time was negotiating the Treaty of Campo Formio near Udine.

During Bonaparte's Italian campaign of 1796/97, Larrey, a professor of anatomy at the Val-de-Grâce military hospital in Paris, had served as surgeon-in-chief of the Revolutionary armies in Italy. The document in question was certainly connected to his work during the campaign, as Larrey announces that Clarke will "recognize many battle sites where you saw me dressing the wounded". With the peace treaty pending, Larrey apparently was thinking about his possible demobilization: "I am afraid of losing my post at the Val-de-Grâce". As he did not personally know Napoleon at the time, Larrey needed his "works to speak for him" in order to win Napoleon's "confidence and estimation".

The following years suggest that Larrey was successful in winning Napoleon's confidence. He took part in the Egyptian campaign from 1798, during which he established a medical school for military physicians in Cairo. In several later campaigns, Larrey served as chief surgeon, including the catastrophic invasion of Russia and the final Waterloo campaign. He was universally estimated for his bravery and commitment, personally saving many lives and modernizing battlefield medicine. 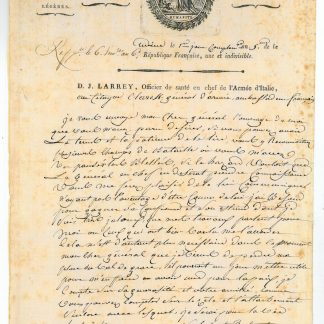