4to. French manuscripts on pink paper. Together 4 pp.

Two manuscripts for Gautier's monthly series on thrillers and detective stories, "Un roman policier par mois", written for the literary supplement of "Le Figaro". Gautier reviewed Charles Exbrayat's "Pour Bellinda" (Librairie des Champs-Elysées, 1967) and the French translation of Donald E. Westlake's (aka Richard Stark) "Green Eagle Score" by Noël Chassériau, entitled "Le divan indiscret" (Gallimard, 1968). The beginning of the review of "Le divan indiscrète" is programmatic: "Without having to search very long, I found more than one thriller in a month that is worthy to be brought to our readers' attention. I hesitated for a moment considering the right approach: should I discuss several of them at once but afford each less space, which would not do justice to their quality; or report on only one... and keep the others in reserve." In the reviews, Gaultier considers the author's plot and character building but also makes general statements about the characteristics and literary values of the genre, probably in view of an audience that is accustomed to high-brow literature and might consider thrillers a lesser genre.

Both manuscripts show several autograph cancellations and emendations as well as editorial notes in red crayon and red felt pen. The two leaves of both manuscripts are joined with an old paper clip each in the right margin, leaving marks and minor tears. The review of "Pour Belinda" has a tear to the lower right corner of both pages, affecting Gautier's signature, and two minor tears. The review of "Le divan indiscret" shows traces of adhesive tape to the upper right margin. Very slight browning. 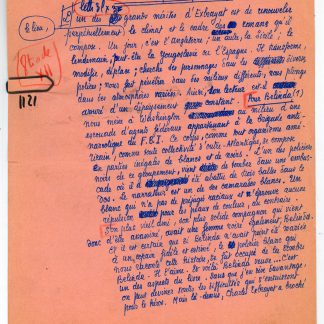