Signed by all 56 contributors

One of only 25 signed copies. The famous double number of the avant-garde literary magazine: a milestone of the Beat Generation and one of the most important anthologies of underground literature of the 1960s and '70s. Featuring 56 original signatures by leading figures of the Beat Generation, including William S. Burroughs, Jack Kerouac, John Cage, Samuel Beckett, David Hockney (monogram), Ronald D. Laing, Allen Ginsberg, Gregory Corso, Robert Creeley, Thom Gunn, and Jack Hirschman.

"New Departures" was founded in 1959 by the editor, poet, translator, and performance artist Michael Horovitz (1935-2021), a pioneer of London underground culture during the Swinging Sixties.

From a Viennese private collection. In fine condition. 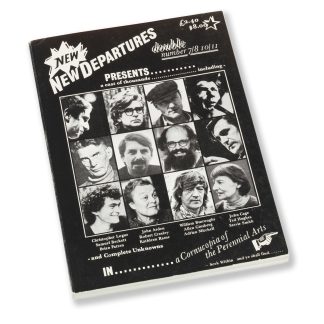