Highly interesting letter offering a contemporary view on the Italian occultist and impostor Giuseppe Balsamo (1743-95), better known as Count Alessandro di Cagliostro, in the immediate aftermath of his arrest in Rome on 27 December 1789. After apologizing for not writing earlier, as he had to respond to "heaps of annoying Christmas wishes" that occupy secretaries such as himself, "nihil agendo", Fogli relates what he knows about Cagliostro's imprisonment in Rome and the reaction of the populace: "Mr. Cagliostro, who caused so much commotion in France, nevertheless continues to be imprisoned in Castel Sant'Angelo surrounded by guards, who have been doubled by order of His Holiness, which demonstrates that his crime is not just a bagatelle. What did he think he was doing? Will Rome be as agitated as France is said to have been? That is what the eager Roman people are expecting; the cafés and houses are filled with chatter, but in reality it has not yet been possible to understand the true cause of the imprisonment of this illustrious impostor" (transl.).

Giuseppe Balsamo was born into a poor Palermitan family that provided him with a good education. Around 1760 he started a novitiate in the convent of the Fatebenefratelli in Caltragirone. Serving as the assistant to the monastery's pharmacist, Balsamo received basic medical and pharmacological training but was eventually expelled from the convent for misconduct. In 1764 he defrauded a goldsmith posing as an occultist and fled to Malta. There, he first introduced himself as Count Cagliostro before the Grand Master of the Sovereign Military Order of Malta, who employed him as a pharmacist. According to Cagliostro's claims, he subsequently travelled to Greece, Egypt, and Persia and was initiated to ancient masonic rites and alchemical knowledge during his journey. In 1768, he worked briefly as secretary to Cardinal Orsini in Rome, soon moving on with his wife and the forger Agliato to London, Courland, Poland, and Germany, among other destinations. After a failed attempt to win the patronage of Catherine the Great, who had received warning, they abruptly left St Petersburg for Strasbourg in 1780. France proved a more fertile ground for Cagliostro's schemes. His growing reputation as an occultist, freemason and healer earned him an invitation to Paris by Cardinal Rohan in 1785, where he received a warm welcome at the court. Soon after his arrival, however, Cagliostro was prosecuted in the infamous Affair of the Diamond Necklace, which involved Marie Antoinette and Cardinal Rohan. Cagliostro was eventually acquitted under the condition of permanently leaving France. During a 1789 visit to Rome, Cagliostro was arrested by the Inquisition on suspicion of trying to start a masonic lodge. Initially condemned to death, his sentence was reduced to life in prison at Forte di San Leo, where he died in 1795.

According to a later note, the letter was addressed to Archbishop Alessandro Alessandretti (1738-1815).

Traces of folds. With a minor tear and collector's notes in pencil. 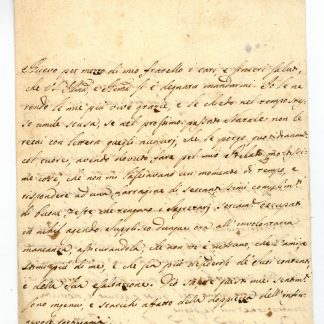