Encyclopaedia of Wood from Mesopotamia

This exceptionally large tablet with a highly interesting lexical table of wooden objects written in four columns on each side has been certified and dated by the British archaeologist and Assyriologist Wilfred G. Lambert (1926-2011) in an undated expertise report (enclosed). It is datable to the late Old Babylonian or the Kassite period of the Babylonian Empire. Although the Kassite rulers originally spoke their own, unclassified language, the Babylonian variant of Akkadian remained the most common and the only written language throughout the period.

Wood was a valuable commodity in ancient Mesopotamia, as it had to be largely imported. The Epic of Gilgamesh offers a mythological rendition of this situation as Gilgamesh kills the giant Humbaba, guardian of the Lebanese Cedar Forest, in order to bring the prized wood to Mesopotamia and build the city gate of Nippur.

Joined from several pieces with small voids and surface wear affecting parts of the text, particularly along the seams. From an old English private collection, acquired around 1980. 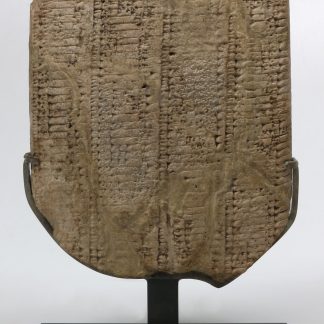