Unique, early Renaissance alchemical manual drawing on Rhazes and the Arabic tradition, a source for Hieronymus Bock and Western botany

A Renaissance alchemist's handbook, quoting Al-Razi by name and deeply rooted in the Islamic tradition of alchemical art. An intriguing manuscript which bears witness to early practical chemistry in 15th century Germany and to the immense influence of Arabic alchemy, illustrated with talented watercolour diagrams of the associated apparatus.

Indeed, the word 'alchemy' itself is derived from the Arabic word 'al-kimia', and it was Al-Razi who claimed that "the study of philosophy could not be considered complete, and a learned man could not be called a philosopher, until he has succeeded in producing the alchemical transmutation". Alchemy and chemistry often overlapped in the early Islamic world, but "for many years Western scholars ignored Al-Razi's praise for alchemy, seeing alchemy instead as a pseudoscience, false in its purposes and fundamentally wrong in its methods, closer to magic and superstition than to the 'enlightened' sciences. Only in recent years have pioneering studies conducted by historians of science, philologists, and historians of the book demonstrated the importance of alchemical practices and discoveries in creating the foundations of modern chemistry" (Ferrario). The quest to transmute base metals into gold and to obtain the Philosophers' Stone was a practical as well as theoretical pursuit, as attested by the existence of this manuscript. The main body of the text opens on fol. 5 with an introduction to the art of alchemy, whose practice requires reference to the ancient authorities. Recipes for the various pigments, solutions, acids and alkalis are listed in groups, before descriptions are given of the planets relevant to the alchemist's art, starting with Saturn, and their effect on the elements, again with reference to the ancient authorities including Al-Razi, Origen, Aristotle, Albertus Magnus, and Hermes Trismegistus. There follow notes on the ease of obtaining various elements, before lists of alchemical compounds - including 'sal petri' and 'aqua lunaris' - are grouped according to their nature. Practical instructions, organised by chapter, begin on fol. 17v with the manufacture of vermillion and 'spangrün'; the first of the illustrations depicts two vessels for the burning of cinnabar. Further recipes involve the burning of various substances - illustrated with drawings of furnaces, cucurbits and other vessels, and distillation apparatus - before moving on to the manufacture of acids, bases and oils, mentioning the use of quicksilver, then, finally, turning to the manufacture of gold. The end of the text on fol. 69 is marked with the words 'Alchimia & Scientia' in red ink with calligraphic flourishes, above a floral device.

Collation: written by another scribe and bound before the alchemist's handbook (ff. 5-69) are astrological calculations, including those charting the trajectories of the Sun and the Moon (ff. 1-4, obviously incomplete). At the end, 9 leaves with geometrical calculations, illustrated with pen diagrams (ff. 70v-78, apparently incomplete, 2 leaves loose). The last 12 leaves are blanks (ff. 79-91).

Condition: The binding is sound and intact, but shows significant losses to the upper cover; spine entirely lost. Two leaves loose at the end of the manuscript, outer margins waterstained and tattered, surface soiling most notable to f. 1. Occasionally loose and split at gatherings; presence of bookworm damage on some pages; very occasional wax stains.

Provenance: 1) The script, watermark and binding indicate that the manuscript was made in Germany in the final two decades of the 15th century. The watermark visible on certain pages - a heart beneath a crown, above 'Ib' - is closest to a motif widely used in Germany around 1480-1500 (cf. Piccard 32464-32481), and the binding is contemporary. The pastedowns, taken from a Litany of Saints, are also roughly contemporary. 2) This compendium of cryptic knowledge seems to have lain undisturbed for many years after its compilation: the contemporary stamped leather binding is preserved and no booklabels or ownership inscriptions mark the manuscript changing hands. 3) Zisska & Schauer, 4 May 2010, lot 6. 4) Braunschweig Collection, Paris.

The first pigment recipe books in German would not be published until the 1530s (cf. Schießl, Die deutschsprachige Literatur zu Werkstoffen und Techniken der Malerei, 1989). While the manual at hand never appeared in print, a much later manuscript of the same text, apparently copied by no less an authority than the botanist Hieronymus Bock (1498-1554), survives in Heidelberg's University Library under the title of "Ordenlicher proces der waren alten heimlichen kunst der alchymey in drey bucher gestelt" ("Alchemistisches Kunstbuch", Cod. Pal. germ. 294, dated to the middle or third quarter of the 16th century). Unlike the vividly coloured and deftly shaded illustrations in the present volume from the 15th century, the unsophisticated pen drawings in the later Palatina manuscript were clearly executed by the scribe himself rather than by a trained artist. Also, our manual contains additional illustrations at the end, showing some of the most necessary equipment on a double-page spread, as well as five additional pages of recipes for "lutum sapientiae", "postulatz golt" etc., some parts written in a secret cipher, all of which are lacking from Bock's copy. 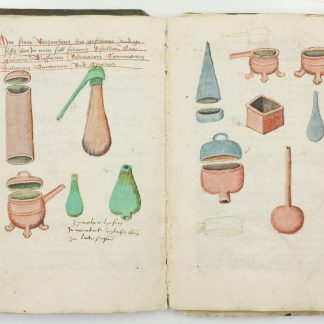