[Mariazell - Austrian popular piety]. Devotional images of Mariazell in the form of a letter, engraved throughout.

Austria, second half of the 18th century.

Rare and highly interesting "devotional letter" intended to inspire pilgrimages to Mariazell in Styria. Folded as an envelope, it bears an address wherein the Virgin Mary prompts the "dear leaf" to assure all sinners, all the pious, the sick, and the sorrowful that the letter is from the her and that she will be a "faithful mother" to them all. Two small reproductions of the miraculous "Magna Mater Austria" imitate a wax seal.

The letter unfolds like a winged altar, with left and right panels on both sides of the sheet. Two poems to the sides of the address invoke the Virgin as "consoler of the sorrowful" and "healer of the sick", while the accompanying images show the founding legends of Mariazell. On the right is the monk Magnus (bearing the sculpted Magna Mater on horseback), who was sent to the area in 1157 and is said to have founded the original "Zelle", here shown in the background, following a miracle. On the left we see the sleeping King Louis I of Hungary (1326-82) who, according to legend, was presented with the so-called “Schatzkammerbild” in a dream ahead of a battle against superior Turkish forces and founded the basilica following his unlikely victory.

The legends are continued in the side panels of the reverse, showing Louis' victorious battle underneath a miraculous appearance of the "Schatzkammerbild" on the right, and on the left an adoration of the Magna Mater, here "undressed", in the forest clearing where Magnus built the first wooden chapel. The centrepiece combines a veduta of the basilica with its three towers approached by numerous pilgrims with another heavenly appearance of the Magna Mater presented by angels and cherubs.

Although clearly baroque in its style, abundance, and inventiveness, it is difficult to date such objects of popular piety with certainty. One of the few comparable devotional letters, an engraving published in St. Pölten, refers to the consecration of a new altar for the “Schatzkammerbild” in 1778. Considering the lower quality of this late 18th century print, it seems to be a feebler execution of an earlier design.

Very well preserved with insignificant stains and tiny tears to the folds. 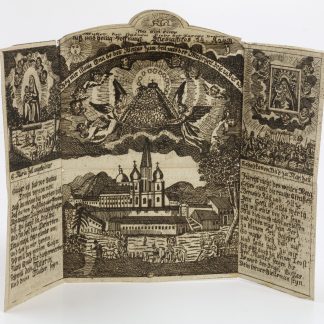 You're viewing: [Mariazell - Austrian popular piety]. Devotional images of Mariazell in the form of a letter, engraved throughout.Austria, second half of the 18th century. € 850.00
Add to cart