Earliest printing of Arabic physicians in a modern vernacular

One of the earliest medical books in the vernacular and the first printed German pharmacopoeia. First dated edition: an undated edition was published at Augsburg in the same year, followed by four more printed editions before 1500. Of the utmost rarity, no copy of the present first edition traceable at auction or in the trade since 1950. Only Lathrop C. Harper offered a copy of the Augsburg edition in 1953, then described as "one of the earliest and rarest medical books of the fifteenth century".

Drawing strongly on the Arabic physicians who dominated the medieval medical school, Ortolff's work contains not only countless references to Avicenna, al-Razi, Mansur and Ibn Rushd (especially in the part on the preservation of health from fol. 44 onwards) but even some of the earliest complete renderings of their tracts into a modern language, here printed for the first time: "leaves 7 to 13 contain 'Meyster Isaacs Buch', which is nothing less than Isaac Judaeus' book on Uroscopy, by far the most elaborate medieval treatise on the subject" (Sarton). The final part of Ortolff's work is dedicated to the prescriptions for remedies used in professional medicine, making his Arzneibuch the "first German pharmacist handbook" (Schelenz) ever.

Modern spine professionally supplied, preserving the original covers with fine gothic blindstamps (not recorded in Schunke, Schwenke-Sammlung). Inner hinges and gutters of the first and last few leaves reinforced with Japanese paper; a few professional remarginings, but tightly sewn. First leaf of the registrum and text of last leaf (with one printed paragraph of 7 lines only) both supplied in 19th century manuscript. Textually complete with the dated imprint on the last leaf of the registrum present. Complete copies are nearly unobtainable: even the reference copy stored at the BSB in Munich lacks seven leaves.

Provenance: contemporary marginalia and foliation. 17th or early 18th century manuscript ownership of Ottobeuren Abbey ("monasterii ottenburani") in Bavaria at the head of the first text leaf; later in a Württembergian private collection.

Cat. no.: 1 Catalogue: A Selection of 20 Books and Manuscripts on the Art of Alchemy Tags: Bavaria, Early printing to 1600, Incunabula, Medicine, Recipe books 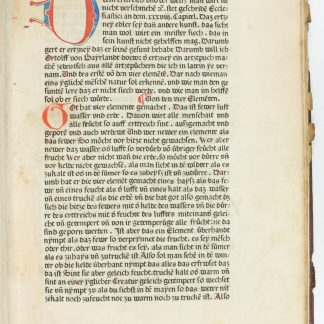