First edition. The title-page has a presentation inscription to the 21-year-old Hugo Bergmann on the day of his doctorate in philosophy: "Zur Erinnerung an unser gemeinschaftliches Streben" ("In memory of our common endeavours"). Written in the hand of the Prague intellectual Berta Fanta, the presentation is signed by her and six other members of their friendship circle: Bergmann's former classmate Franz Kafka, Dr. Max Lederer, Ida Freund, Oskar Pollak, his uncle Leopold Pollak, and Emil Utitz.

Berta Fanta (1865-1918) led a well-known Prague literary and philosophical salon, attended variously by Albert Einstein, Kafka, Brod, Bergmann (who was to marry Fanta's daughter Else), Rudolf Steiner and others. Ida Freund (1868-1931) was Fanta's sister. Like Bergmann, the jurist Max Lederer had been a student of the philosopher Anton Marty and shared the circle's interest in the philosophy of Franz Brentano. The art historian Oskar Pollak (1883-1915) had been succeeded by Kafka as rapporteur of the literary arts section Prague's Charles University in 1903. Kafka's classmate Emil Utitz (1883-1956) would defend his own PhD in 1906. He went on to teach philosophy and psychology at Rostock and later at Halle; after his deportation to Theresienstadt, he was head of the ghetto library.

The recipient Hugo Bergmann (1883-1975) had been a schoolfriend of Kafka's, and was close to Max Brod, whom he introduced to Zionism. Bergmann emigrated to Israel in 1920, where he was director of the Jewish National Library and a professor, and later dean, of the Hebrew University in Jerusalem. In his reminiscences of Kafka, published and reprinted in various journals from 1969 onward, Bergmann describes this presentation volume, adding that "a graphologist would undoubtedly signalize the fact that, while the others wrote their signatures in a column, one underneath the other, Kafka set his own name apart from the others, to one side" (cf. Bergmann 1972, p. 745).

The book forms the principal work of the German philosopher Busse, a classic of the turn-of-the-century discussion over the relationship of mind and body, when psychology was emancipating itself as a discipline independent from philosophy. The numerous pencil annotations in Bergmann's characteristic shorthand show that he read the volume closely. 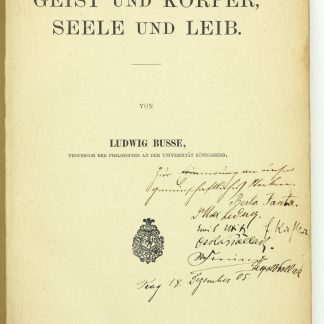