"Physicists have no interest in elaborations of formulas they don't use"

Two densely scientific letters on "operational calculus", vector notation and the laws of dynamics by the pioneering physicist and electrical engineer Oliver Heaviside, from the archive of the Polish-American physicist and opponent of Einstein, Ludwik Silberstein (1872-1948).

The first letter responding to Silberstein's request for copies of his papers, "On Operators in Physical Mathematics" (published 1892/93), the final part unavailable "because it received the honour of being declined [for publication]". Heaviside notes that the second part of his E.M.T. ("Electromagnetic Theory", 1899) contains the same material, while the third part, whose publication has been "delayed by editorial inappreciation", has more on "operational stuff", on which he elaborates a little.

The second letter opens with Heaviside confirming receipt of Silberstein's book (presumably "Vectorial Mechanics", 1913) and paper - "I am very glad you adopted (in the main) my notation in vectors. To be practically useful, we must not conflict with ordinary alg[ebraic] practices, tho' we may extend their meanings" - before launching into a detailed set of improvements that might be made to Silberstein's system of formulae and notation of vectors in a second edition. "Physicists have no interest in elaborations of formulas they don't use, & c'd not remember. Besides, in more advanced work the needed extensions can be introduced when wanted". He continues at length, broadening his exposition to touch on the physics of d'Alembert, Lagrange and Newton and current understanding of the laws of motion.

Provenance: from the sale of Ludwik Silberstein's archive, RR Auctions, 20 May 2021, lots 4031 and 4033. Autograph material by Heaviside is notably rare on the market. 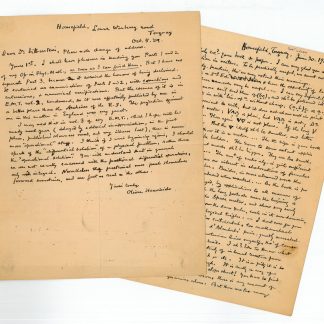