Gandhi and the Governor of Bengal

Gandhi, Mohandas Karamchand, leader of India during the Indian independence movement (1869-1948). Photograph of Mahatma Gandhi seated with Sir Richard Casey, Governor of Bengal, during their meeting at Calcutta. Signed by Gandhi ("M. K. Gandhi" and in Gujarati) and Casey ("R. G. Casey").

Richard Casey (1890-1976) was made Governor of Bengal by Winston Churchill in January 1944, in the immediate aftermath of the great famine, and against a background of increased nationalist agitation. He "was shocked by British racial snobbery, and he tried to break down walls between Government House in Calcutta and the local community" (Australian DNB), partly through the organisation of a series of face-to-face meetings held between himself and Gandhi in Kolkata (Calcutta) in December 1945, at one of which our photograph was taken. In later life Casey served as Governor-General of Australia from 1965 to 1969.

Provenance: Arthur Hughes, Indian Civil Service, Labour Commissioner and Registrar of Trade Unions, Bengal (mentioned in the King's Birthday Honours list for 1943), and later Senior Master at Doon School; by descent to the second last owner. Arthur Hughes and his brother Jack were present in Calcutta at the time of the meeting with Gandhi. Arthur was working for the Civil Service, as correctly stated, and managed to find a role for his younger brother as he left the Gurkhas, with whom he was serving in Bengal at the time. Jack was assigned as Richard Casey's assistant, which launched his career in the Civil Service and he was awarded an OBE in 1959. 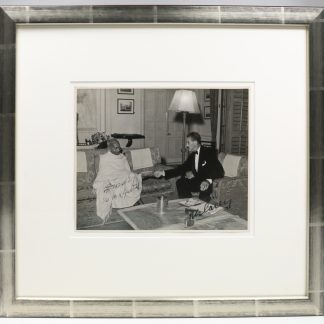