"I shall be going to the States, fairly soon, I think, and don't know when I shall return": writing months before embarking on his fateful American journey

To Kathleen Delvev, apologising for not writing sooner, as he has been away, thanking her but declining her invitation to speak at the Taunton Book Club: "Thank you for your invitation to come to the Taunton Book Club, but I'm afraid I won't be able to accept it as I shall be going to the States, fairly soon, I think, and don't know when I shall return: all my plans are in such a muddle at the moment [...]".

Thomas undertook four tours of America between 1950 and 1953. Here he writes in July 1953, fresh from his third visit, where he performed a "work in progress" version of Under Milk Wood, initially as a solo piece at Harvard and then at the Poetry Centre in New York with a full cast, when he gave his rewritten lines to the actors just minutes before the play began. During this tour he also began his affair with Elizabeth Reitell, the assistant of poet John Brinnin.

The following months back home, when this letter was written, were characterised by heightening tensions with his wife Caitlin and his increasingly unpredictable behaviour, fuelled by a desperate need to escape his situation ("all my plans are in such a muddle"). Encouraged by promises of more performances at the Poetry Centre and a month collaborating with Stravinsky in California, he returned to New York in October - "to Reitell, and exhaustion. Drinking heavily, he became ill and intermittently deranged about the time of his thirty-ninth birthday at the end of the month. On 4 November a doctor unwisely sedated him by injecting half a grain of morphine, which was to prove fatal" (Paul Ferris, ODNB).

Kathleen Delves was the secretary of the Taunton Book Club in the 1950s and, on hearing Dylan Thomas was available for public engagements, she invited him to speak. His reply has been retained in the family until now. It is unpublished, not appearing in the Collected Letters (ed. Paul Ferris, 2000). 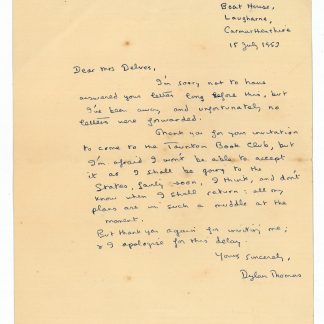