A fine Chaldean-rite prayer book written towards the end of the contested patriarchate of Joseph V Augustine Hindi (lasting from 1781 to 1827). Includes prayers against the plague, for holidays such as Good Friday, Easter and Ascension, for various times of the day, and for thanksgiving, as well as to the Virgin Mary and Christ. Special prayers for women are mentioned, as are certain Psalms, St. Joseph, Pope Sixtus IV, the Ten Commandments, and the necessary steps toward converting to Christianity. Occasionally, differences between the Chaldean and Roman Catholic rites are mentioned.

The book is written in easily legible Arabic, one of the languages of worship for Chaldeans, whose usual language was in fact Aramaic, the language of Jesus. The name of God is here consistently written as "Allah", while a total of 36 crosses are drawn throughout the text. Curiously, the compiler's Nisbah is given as "Al-Mardinli" ("from Mardin"), in the Ottoman rather than pure Arabic form - a detail that gives evidence of the degree to which cultures, religions and languages were intertwined in the Mesopotamian region.

In full communion with Rome, the Chaldean Catholic Church emerged from the Church of the East through the schism of 1552. By the 17th century, leaders would take the name Joseph, for which reason theirs is known as the "Josephite line" of succession. Although Augustine Hindi, the nephew of his predecessor Joseph IV, was never formally granted recognition by the Holy See as Patriarch of the Chaldeans, he was consecrated as bishop and named administrator of the patriarchate, and he became commonly known as Joseph V.

Binding a little rubbed; old note to lower flyleaf, written head over heels. An interesting cross-cultural document of the interaction between the Eastern and Western Churches, between regional languages and religions in the Middle East. 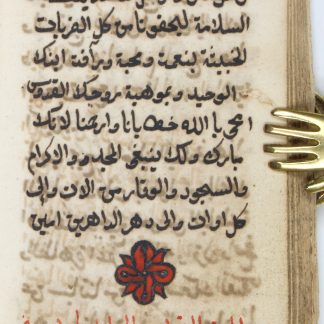