Ockley, Simon. An account of the authority of the Arabick manuscripts in the Bodleian Library, controverted between Dr. Grabe and Mr. Whiston [...].

Very scarce pamphlet in which the Cambridge orientalist Ockley (1678-1720) endeavoured to clear himself of the charge of sympathising with William Whiston's Arian tendencies. Ockley translated the Second Book of Esdras from an Arabic manuscript in the Bodleian Library for Whiston's controversial work "Primitive Christianity Reviv'd" (1711), but issued his translation separately in 1716, so as to emphasise his disagreement with Whiston. In the present account Ockley states that he was hesitant to prepare the translation, stressing that he "was loath that any thing with [his] Name to it should be extant only in his [Whiston's] Heretical Volumes" (p. 31). 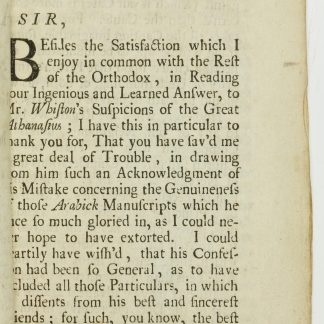