Exceptionally rare work on drug trafficking in Egypt in the 1930s and an important example of the "war on drugs" of the author, who was director of the Central Narcotics Intelligence Bureau. Thomas Wentworth Russell (1879-1954), sometimes better known as Russell Pasha, was a police officer in service of Egypt who was appalled by the increasing drug trafficking in Egypt and the high amount of drug addicts in the country. He founded the Central Narcotics Intelligence Bureau (CNIB), making it his mission to rid Egypt of especially what he called "white drugs" (cocaine, morphine, heroin), but also of "black drugs" (hashish, opium). Russell can be considered as one of the most important anti-drug campaigners in Egypt in his time and after, as he really raised awareness for the rising problem. In this work, Russell describes how drugs are smuggled in large quantities from abroad to Egypt. In many chapters, he extensively describes the foreign sources of supply (discussing not only important drug barons, but also mentioning specific ships and other means of transport which smuggled drugs), cases in which weapons were used by traffickers, on people involved in the trade, on traffickers and their methods of smuggling (among others in shoes, camel saddles, etc.), on addiction and the social effects and death rates, and many more. It is a scarce and outstanding example of Russell's anti-drug campaign, extensively describing drug trafficking in Egypt in the 1930s, being well-illustrated with photographs of drug barons, users, traffickers and methods of concealment.

Presentation copy to the English poet and dramatist John Drinkwater with an inscription by Russelll on the front wrapper ("John Drinkwater / With compliments from the director / Tho Russell / 24/3/33" / [Arabic script]") and his red stamp next to the inscription. 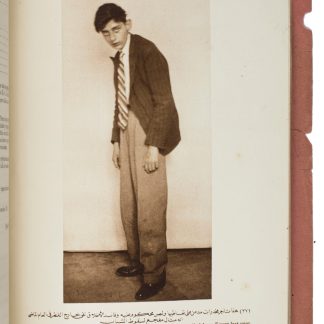