4to. Italian manuscript on paper. 1 p. on bifolium.

Typical short Jesuit eulogy, composed to be read in Jesuit colleges on the anniversary of Ramos's death. The text was sent as a letter to the Jesuit Girolamo Mattia at the College of Recanati (Marche).

Francisco Ramos was a Jesuit in Carmona near Seville who died at only 28 years of age, "after a long and painful sickness", on 23 June 1719. Ramos is lauded as a powerful preacher and, according to the eulogy, his singular modesty earned him the general reputation as "another Saint Luigi Gonzaga", a Jesuit saint who died of the plague in Rome at an even younger age than Ramos. To recommend Ramos for beatification, the eulogy reports the vision of a nun in the moment of his passing: "In the moment of his death he was seen by a nun of well known virtue and far away from Carmona gloriously entering Paradise".

With a tear from breaking the seal, minor tears and browning. 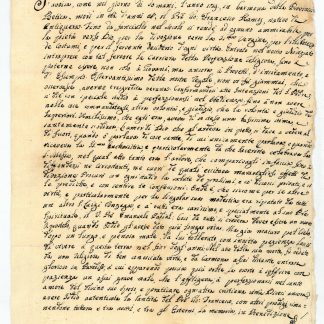