50 designs for fancy beds and curtains in the Empire Style

Rare collection of designs for splendid interior decorations. The set depicts oppulent beds, curtains and entire rooms in the Empire style with French captions and scales. Not seen at auction for more than a century.

The series "Recueil de draperies d'Hallavant" appeared from ca. 1810 to 1839 in 7 "cahiers", each containing between 44 and 50 plates. They were published by Osmont in Paris, and later by Pinsonnière. Copies were sold coloured and uncoloured, with and without a title-page. The series was issued without any dates except for the 7th cahier, which appeared in 1839. The earlier volumes can be dated only based on internal evidence of drapery styles. Judging from the number of plates and the style, the present volume presumably is either cahier 2 or 3.

Extremities rubbed; corners bumped. Occasional light spotting near margins; some plate numbers and captions partly cut; the plates in very good condition. A fine copy of this artistic work essential for the spreading of the Empire style across Europe. 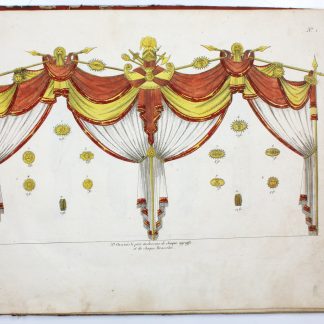