"It almost looks like I'm getting my finances in order": Alexander von Humboldt and his banker and friend Auguste Léo

8vo. Together 10 pp. With 1 autograph envelope with traces of seal. In French.

Highly interesting and substantial correspondence with his Parisian banker and friend Auguste Léo (1793-1859), a business associate of Mendelssohn & Co. In his letters, Humboldt shifts seamlessly from financial matters, mostly payment orders, to private conversations, both of which illuminate important aspects of his life during this period.

The familiarity between Humboldt and Léo, as well as Humboldt's generosity, is on display in the earliest dateable letter of the collection from 1835. The letter was delivered by a Swiss engineer named Loba who was seeking a Prussian patent "under the supervision of our tyrant Beuth", referring to the Prussian administrator and reformer Peter Beuth, for a measuring instrument. Humboldt asks Léo "to sacrifice a few moments to Mr. Loba and give him some advice", assuming that he knows the Prussian "forms of patent legislation." In closing, he praises the famous portraitist Henri Lehmann: "I am still under the spell of the beautiful and solid talent of Mr. Lehmann. His person can increase this charm". Lehmann's portrait of Humboldt, now on display at the Deutsches Historisches Museum, was commissioned by Auguste Léo and his wife in 1835.

A letter from 3 October 1838 is a perfect example for the charming combination of business and private correspondence: "I returned safe and sound from Cherbourg, I dined with M. [Mathieu] Molé who feels quite relieved about the resolution of the Swiss affairs, in the evening I was also at the Tuileries, where they are also content and I am again taking up the course of my boring impressions. [...] Might I ask you that day for the sum of 1000 francs on my account. I certainly will give you a receipt of 2000 F due to the reimbursement in Berlin".

On 26 November 1838, Humboldt asks to disburse a sum to his servant and later heir Johann Seifert, who "will also present Mr. Ernst, engineer of physical instruments, with a small note from my hand for 150 francs". After summing up his liabilities, Humboldt mentions Mathieu Molé again, as well as Benjamin Delessert, to whom he had apparently talked on Léo's behalf: "I expect that you ask from our friend M. Mendelssohn amounting to what I am importuning you here. I transferred 9100 Fr to him. It almost looks like I am getting my finances in order. I talked to M. Delessert and M. Molé for help from the Chambers. I found them most inclined towards you, especially the former in a more explicit way [...]".

In a letter dated "Ce samedi" that was written in the "distress and tumults" of Humboldt's upcoming departure for Berlin, he asks Léo to settle some payments, including one to the cartographer and printmaker Pierre Antoine Tardieu, and talks humorously about a previous cold: "My enormous cold has much improved. However, something from the renaissance mixed with it because I had to look at the freezing apartments of Mad. the Baroness Salomon, where some Leo X is grafted onto Charlemagne".

The most exceptional letter in the collection, dated "this Monday", was written ahead of a visit to the French Minister of the Interior and is worth quoting extensively, for its wit, humor, and sharp political analysis: "I am completely guilty, my dear and excellent friend, not only of having left your brilliant and agreeable company so early yesterday but also of having been fooled by my memory. After having consulted my gastronomical archives, I discovered that since 8 J[anuary] I am expected on Thursday 2 Febr. at the Minister of the Interior. Dare I ask you to consult my benefactor, Madame Léo, and to ask her for chairs [...] Voilà, in Prussia many antiliberal things [are happening] that disquiet me. This is the cursed dualistic system, the fear that affects the governments immediately after a bit of courage. That's 1788 and 1789".

A particularly charming letter can be dated to 1841 due to its comments on Felix Mendelssohn's incidental music for Ludwig Tieck's staging of "Antigone" that had been commissioned by King Frederick William IV of Prussia: "The astronomer Wilhelm Beer-Mädler already writes me full of bitterness and mockery on behalf of Felix [Mendelssohn], whom the King has forced to compose the chorus for a Greek tragedy (Sophocles' Antigone) which the Monarch has had the whim to have translated by Tieg [Tieck] and which is to be performed and sung at Court. The astronomer suggests that since Antigone is not Lutheran, or at least not very Lutheran, Felix will be soporific. Understand that the letter is not from Meyerbeer, an Italian abbot who is much more reserved".

The final two letters in the collection tell a story of Humboldt's magnanimity being sorely tested. In the earlier letter, dated 30 November, Humboldt asks Léo to disburse 50 écus to Karl von Gagern, an otherwise unknown son of the Prussian lieutenant Gustav von Gagern. Humboldt did not know Karl personally but "his parents who are in Potsdam". On a Wednesday soon thereafter, Humboldt writes again to Léo, first asking him to make a final payment to Achille Valenciennes for his contribution to the final instalment of Humboldt's "Receuil d'observations de zoologie", before returning to Karl von Gagern, now in a very different tone: "I do not regret having thrown away 50 écus on a M. Charles de Gagern because he is the son of a respectable lady from Potsdam, brother-in-law of M. de Siebold, the famous traveller to Japan, but I consider it impolite that he did not send me a thank-you note nor responded to the reproaches that I addressed to him in writing a few days ago. Since my hunter [Johann Seifert] is no strong linguist, I dare to ask you, out of pure curiosity, to inquire [...] whether he still resides in Paris. I do not want his money but less rude proceedings". In a postscript, Humboldt relates that he received a letter from Helmina von Chézy in Heidelberg, informing him that she has received 133 écus.

Traces of folds; occasional stains and minor browning. The letter with references to Felix Mendelssohn-Bartholdy somewhat creased and with tear from breaking the seal. 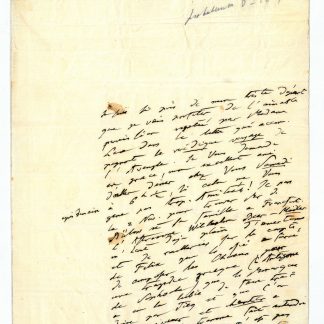