Nautical chart of the Gulf of Aden from the Bab al-Mandab Strait to the city of Aden, prepared by the British Admiralty. The chart details the approximate western boundary of the British Protectorate and pays particular attention to geological features, labelling the Jebel Arror or Chimney Peaks, as well as numerous other hills along the coast including the Sugarloaf near Aden. Among the most prominent labelled places are Perim Island, Jezirath Sowabih, Jebel Manhali, Sakiah, Ras al Ara, Aden, and Aden Harbour.

The British Admiralty has produced nautical charts since 1795 under the auspices of the United Kingdom Hydrographic Office (HO). Its main task was to provide the Royal Navy with navigational products and service, but since 1821 it has also sold charts to the public. The present chart was composed after Admiralty surveys of 1900 and 1929; it was first published in 1930 and saw several corrections up to 1935.

With a single fold. Small ruststains near lower corners; a few manuscript notes. Captioned in print and in a former collector's hand on verso. 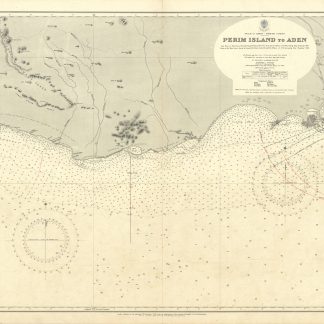