Nautical chart of the northern Red Sea, showing the Sinai Peninsula, the Gulf of Suez and the Gulf of Aqaba, prepared by the British Admiralty. With 4 inset maps displaying the Tiran Island anchorage, Sherm Yahar, Sherm Jubba, and El Tor harbour.

The chart details major cities including Sharm-el-Sheikh, Hurghada, Aqaba, Magna, and Suez, as well as historic landmarks like Mowila fort. In addition, the chart warns the mariner of dangerous currents in the Red Sea as well as tidal streams in the Gulf of Suez. The inset map of El Tor harbour shows hospital buildings, a well of fresh water, pilgrims' baracks, mosques, ruins, and the camel track to Wadi Sillah.

With a small illustration of the Ashrafi lighthouse.

The British Admiralty has produced nautical charts since 1795 under the auspices of the United Kingdom Hydrographic Office (HO). Its main task was to provide the Royal Navy with navigational products and service, but since 1821 it has also sold charts to the public. The present chart was composed after Admiralty surveys of 1830-34 and 1911; it was first published in 1873 and saw several corrections up to 1931.

Small tear in lower margin, not touching image. Top margin slightly creased. A single fold; a few manuscript notes. With a stamp "Increase 50%" near lower right corner. Captioned in print and in a former collector's hand on verso. 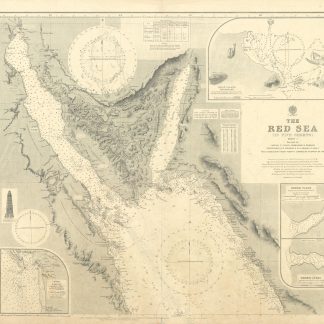