(Oblong) 8vo. Altogether 73¾ pp. on 22 bifolia and 1 single sheet. 11 letters in pencil; 2 on mourning paper. 6 with engraved or printed letterhead. With one autograph envelope.

Amicable correspondence with her good friend Jessie Lennox (1830-1933), one of the original "Nightingale Nurses" who trained at the Florence Nightingale School at St. Thomas's Hospital in London in the 1860s. Written in the fondest terms and taking great interest in her work, Florence Nightingale rejoices at the progress already made in the nursing profession, asks for advice and discusses at length, over several letters, the ideal role of the matron she wishes to appoint to take over the care of some 500 poor boys in an "industrial boys home". The matron, she writes, should embody the practicalities of a trained nurse with a mother's care for her charges, with an emphasis on good diet, warm clothing and good shoes. She cites the story of Ella Pirrie, the Lady Superintendent of the Union Infirmary at Belfast, who persuaded a child struck dumb to speak by adopting this gentle approach when harsher means had failed. She asks Lennox's advice in drawing up a set of requirements to put forward as clearly as possible to the "man committee": "This [...] is a difficulty because the man-Committee does not seem to think a woman has any business in the Barrack huts at all [...] In fact I do not expect to get her at all [...]" (11 April 1887). Her frustration with such committees is evident, even for an influential person such as herself, but she recognizes the enormous progress that has already been made in changing the status of nursing into a highly trained respectable profession. She goes on to discuss the tasks of the district nurse and her ability to become a role model: "The work of the District Nurses is truly not only to nurse, but to teach the families how to nurse […] to know to what charity or authority to apply, to get flannels, sick comforts, food & stimulants, where ordered - sick appliances, bedding, warm clothing, where imperatively needed [...] do not you think that these things had better not be given by the District Nurse herself. For where alms-giving, clothes-giving [...] is practiced by the nurse, real nursing flies out of the window [...] if the nurse has really that influence which she ought to have in the Patient's family, do they not become ashamed of letting her see the man or the woman drunk again? And does not that exercise a reforming influence? [...]" (23 May 1889).

The collection includes a facsimile letter dated May 1900 addressed to all her nurses ("My dear children") in which she recognizes her role as the Mother of Nursing and speaks of advances in medicine and the professionalisation of nursing, ending however with a swipe at the suffragists: "You have called me your mother-chief, it is an honour to me & a great honour, to call you my children [...] Woman was the home drudge. Now she is the teacher. Let her not forfeit it by being the arrogant - the 'Equal with men' [...]".

Enclosed is an ALS by Jessie Lennox to Dr Lilias Maclay (b.1893), discussing a letter Lennox gave to Maclay seven years after the death of Florence Nightingale: "This one was written when Miss Florence Nightingale was quite an old lady, when her hand was not very steady. The writing in the early ones is much stronger [...] her body is at rest but her work is still very much with us [...]" (Edinburgh, 21 Dec. 1917). With autograph envelope. Maclay had enrolled at Glasgow University to study for a medical degree in 1912, passing the course with first class certificates in clinical surgery. During WWI she served with the Royal Army Medical Corps in Egypt and is one of the few females featured in the University's Roll of Honour. After her marriage to John Edmund Hamilton in 1926 she practised as a doctor in Glasgow and Edinburgh.

Further includes a typescript solicitor's letter, confirming that a total of 16 letters by Florence Nightingale were bequeathed to Dr Maclay after Lennox's death in 1933. 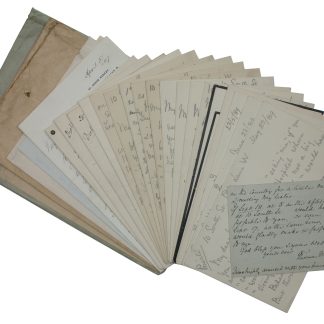