"William First, Or Second, Or Third? / Ask Not, Critics, Great's The Word"

A long, wide-ranging letter to the Scottish lawyer Thomas Burnett (1656-1729) in which Leibniz explains that he intends to write about books received from Burnett and mentions the controversy between John Locke and the Bishop of Worcester, but has no time to do so at present. He encloses some verses from Paris by M. Cresset ("God save the King of Spain, otherwise everything will go completely haywire, and England will not feel at all happy about having being disarmed"), confirms he has received a book on the Council of Trent from the Bishop of Salisbury (Thomas's kinsman Gilbert Burnet), and discusses the literary tastes of the Electress of Brunswick, whose books must "show spirit, and have at the same time something cheerful about them" owing to the recent loss of her husband Ernst August, Elector of Brunswick, from which she is struggling to recover ("the spirit is willing but the flesh is weak"). Leibniz adds a lengthy postscript advising that he is enclosing an extract from a letter he recently sent to the Bishop of Salisbury "in confidence" in which he talks "about matters of religion and the state, both of which are in the competence of the illustrious Bishop", fearing "'black practices' against the King, and that it is right to take every imaginable precaution for the preservation of his person" and hoping that "France will finally resolve herself for good and all to peace. Perhaps she flatters herself that peace will break up the Grand Alliance [...] we in Germany are taking steps to help in assuring the public order [...] to prevent our being taken by surprise". He concludes by describing how he resolved a dispute about coinage of England and muses as to how the King should be designated: "C'est ce que j'ay exprimé par ce distique: Tertius, an primus Guilielmus sit ve secundus, / Desinite o critici quaerere; Magnus erit" ("William First, Or Second, Or Third? / Ask Not, Critics, Great's The Word").

Includes, on a separate quarto leaf, a fair copy of Leibniz's letter to Gilbert Burnet, headed "P.S.": "I have frequently the honour of attending the Electress of Brunswick, which great Princess sometimes will suffer my conversation. We fall often into religion, and I have long been interested in studying controversies [...]". Leibniz is curious about the "separation of communions which one sees among the Protestants", and thinks the differences with Rome "infinitely more important". He is troubled by news that the House of Lords wavered in excluding "Romanists" from the Crown and wonders why Burnet did not support this exclusion, voicing his concern that a future monarch who had the appearance of Protestantism could be working to destroy it. He asks for Burnet's opinion and urges the matter be brought again before parliament.

This letter forms part of the significant, 18-year-long correspondence between Leibniz and Thomas Burnett of Kemnay in Aberdeenshire, occasioned by their meeting at the court of Hanover in 1695. The most recent Akademie edition of Leibniz's correspondence includes some 29 letters from Leibniz to Burnett and 51 from Burnett to Leibniz written during the period 1695-1707, with more still to be published. When Leibniz met Burnett, he was already corresponding on matters religious and political with his cousin Gilbert Burnet, Bishop of Salisbury. Leibniz also found in Burnett a useful conduit to fellow philosopher John Locke, with whom he was keen to correspond, and a source of intellectual and political news and gossip from England and elsewhere. Our letter shows he was also the means for Leibniz to obtain the latest writings published in English ("I saw some issues of an English journal or newspaper which was half-way between a scholarly journal and a society newspaper, but I do not know whether it is carried on").

Also shown here is Leibniz's close relationship with the Electress Sophia, a friendship that lasted for 40 years. Leibniz is clearly preoccupied with English politics and the issue of the Protestant (Hanoverian) succession, demonstrating a great admiration for the English monarchy. At the time of writing, the Electress Sophia was the next Protestant in line to the throne, but it was not until the 1701 Act of Settlement that she was formally named heiress presumptive and, while she did not survive long enough to take up the crown, that position was to be secured by her son George. In the present letter Leibniz fears "black practices" against King William in a precarious political situation and speaks of the readiness of Germany and the Empire to have troops mobilised against France despite negotiations towards peace.

Slight splitting and small holes at folds professionally repaired. Provenance: Thomas Burnett, 2nd Laird of Kemnay (1656-1729), and thence by descent; held in the archive at Kemnay House, Aberdeenshire, until now. The correspondence collected by the Berlin Akademie includes a letter from Leibniz to Gilbert Burnet written three days before ours (no. 311, p. 478), the contents of which, however, bears little resemblance to our "postscript", and it may be, therefore, that our copy is the only surviving record of another letter.

Published in Leibniz, Allgemeiner politischer und historischer Briefwechsel (Berlin, 1998) no. 316, L2, pp. 492f., without the postscript to Thomas Burnett or the copy postscript to Gilbert Burnet. Another longer letter to Burnett, written on the same day, is also included in the correspondence (no. 316, L1, pp. 486-491). It is also published Susan Burnett, Without Fanfare: The Story of my Family (Kemnay, 1994), pp .11f., and elsewhere, but not in Gerhardt, Die philosophischen Schriften von G. W. Leibniz. 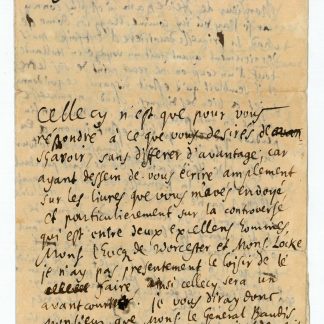