Rare sole editions of two catalogues showcasing the impressive stock - over 13,000 titles - of one of the major Swiss publisher-booksellers of the 18th century. Thomas Bürger credits Heinrich Heidegger and his descendants with helping to usher the Enlightenment into Zürich, a traditionally more conservative printing centre than Basel and Geneva.

The preface here proclaims a sort of 'best price guarantee', promising that Heidegger's prices are the lowest to be found anywhere, and that if any better prices be found in rival catalogs, they will be matched. Also, discounts will be discussed "depending on the nature of the books". Heidegger further promises that readers with specific wish-lists will be given all due attention, and can count on the efforts of not only Heidegger but also "the new partner in our business, [the rival bookselling dynasty of] Johann Rudolph Füssli".

Listing roughly 25 titles per page (alphabetically by author, title, format, place of publication, year, and price), the first work contains a 'Catalogus Universalis' of titles on all subjects in either German or Latin, generally published in the 17th or 18th centuries, comprising some 11,000 books. Following this is a much shorter catalogue (around 2,500 titles) organized by language (roughly 2,000 French, 300 Italian, and a paltry 10 volumes in English) followed by a supplement of a further 100 or so last-minute additions.

The depth of Heidegger's stock is impressive, perhaps offering an insight into the demands of his customers. We find, e.g., Milton in German translation; ten auction and private library catalogues; the collected works of the English philosopher Catharine Trotter Cockburn (1679-1749); and the selection of no fewer than 16 'Robinsonades' (fanciful imitations of Defoe, often surviving poorly in modern censuses) indicate just how popular that vernacular genre was during the mid-18th century. The handful of contemporary manuscript German annotations add information, perhaps gleaned from examining the stock first-hand - for example noting that Nehring's "Einleitung in die Universal-Historie und Geographie" (Halle, 1700) "comes with a chronological table".

OCLC shows four copies in German libraries, two copies in Swiss libraries, and a copy at the British Library. 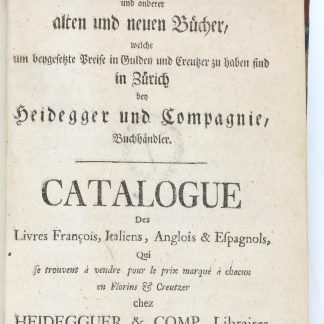