4to (175 x 240 mm). 63, (1) pp. With woodcut printer's device on title-page and a handful of woodcut initials in text. Bound in contemporary stiff vellum. A few leaves re-cornered, otherwise excellent.

Extremely rare sole edition of this curious treatise on the medical effects of the abuse of coffee, by the Venetian botanist Giovanni Jacopo Zannichelli (1695-1759). Zannichelli professes to have been inspired by the Veronese Giovanni dalla Bona's equally brief monograph, "L'Uso, e l'Abuso del Caffe" (1751), but adds his own observations and indeed diagnoses the recipient of his "Lettera" himself with excess coffee consumption.

The text is addressed to an unnamed but evidently illustrious person, in whom Zannichelli determines that coffee has caused violent convulsions, which are 'more frequent after the use of coffee' (p. 7). Giving a handful of case studies, Zannichelli cites other symptoms of coffee abuse: paralysis, tremors, apoplexy, and scurvy.

By way of background, Zannichelli also gives a brief natural history of the plant, noting that its cultivation has recently begun in Java, Réunion, and in 'several provinces of America' - but that the best coffee still comes from Arabia. He also repeats various legends of its discovery, including by Sheikh "Gemaleddin Aldhabban" of Aden, who supposedly brought the drink back to the Arabian Peninsula after tasting it on a trip to Ethiopia in the 15th century.

The second half of the text (pp. 35-61) contains a further, unrelated discussion by Zannichelli of Mt. Vesuvius and the strange chemical properties of its eruptions.

OCLC shows Chicago, Harvard, and the National Library of Rome only. 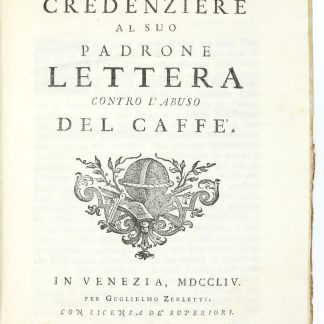