The first visit to China by a Pakistani Prime Minister: signed by Mao, Zhou Enlai, Huang Yanpei, Peng Zhen, Chen Yun and others

Menu card for the state banquet in honour of the Pakistani statesman Huseyn Shaheed Suhrawardy (1892-1963), who only a month earlier had become Prime Minister. The card is signed by Mao and Suhrawardy, as well as by five Chinese statesmen: Zhou Enlai (1898-1976, the official host and Premier of the PRC), Huang Yanpei (1878-1965, Vice Premier of the State Council and Minister of Industry since 1954), Peng Zhen (1902-97, Mayor of Beijing, deposed in 1966 but rehabilitated in 1979 and later Chairman of the National People's Congress), Chen Yun (1905-95, leading economic politician, Party Vice Chairman and later one of the major architects and important policy makers for the Chinese economic reform), and Zhu De (1886-1976, Vice Chairman of the Communist Party and of the PRC, long the Commander-in-Chief of the People's Liberation Army and Mao's military advisor since the 1930s).

During this first visit to China by a Pakistani Prime Minister, the delegations discussed matters such as the exchange of goods (coal for cotton) and industrial development, improvements in water management and the training of engineers. In his conversation with Suhrawardy, Zhou sought to dispel fears of Chinese hegemony: China herself, he pointed out, had suffered under Western colonialism and now wished to pursue industrial development in the spirit of peaceful co-existence with all countries, based on mutual respect. Zhou insisted to a skeptical Suhrawardy that the education of the current generation of Chinese political leaders would ensure that future generations would not commit war or aggression.

A little sunned showing very light traces of matting along the edges, otherwise flawless. Signatures by the "Great Chairman" Mao are extremely rare; an ensemble of signatures by several important figures of the first generation of leaders of the People's Republic is almost unprecedented in the trade. 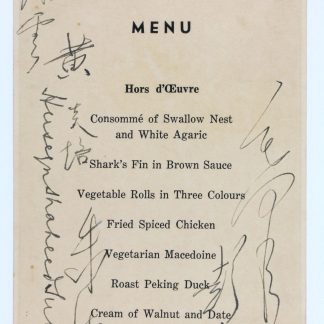