Small 8vo (105 x 159 mm). Illustrated astrological manuscript. Red and black ink in Cyrillic script on paper. 297 ff., written on rectos and versos, with 14 hand-cut and illustrated volvelles with between 1 and 4 moveable parts, 160 chiromantic diagrams, and numerous astrological charts. Engraved folding table of the Cyrillic alphabet inserted in front ("These are the print letters / These are the letters used in writting [sic]", taken from The Russian Catechism [London, Meadows, 1725]). Modern green morocco stamped in blind. Housed in custom green cloth chemise and slipcase. Edges sprinkled red.

A fully handwritten 18th century prognostication manual containing astrological tables and zodiacal charts, Sator squares and other magical tables, as well as ample matter on palmistry. Throughout the volume there are 14 working handcut volvelles with as many as four moveable discs, some with carefully cut windows. An appendix at the end contains an extensive topical manuscript.

Popular divination remained a fixture of Russian folk beliefs long into the 19th century, and the Sator Square was commonly used by the schismatic Russian Orthodox Old Believer communities since the 17th century. From the late 18th century onwards, printed sources discuss the magical folk rituals of Old Russia: as early as 1782, the Russian civil servant Mikhail Dmitrievich Chulkov published his "Slovar' ruskikh sueverii" ("A Dictionary of Russian Superstitions"), which was reprinted four years later as "Abevega russkikh sueverii" ("The ABC of Russian Superstitions", Moscow, 1786) - undoubtedly drawing on some of the same principles that inform the present manual. Another four years later, Semen Komisarov published a fortune-telling compendium ("Drevnii i novyi vsegdashnii gadatel'nyi orakul", Moscow, 1800) containing sections on dream divination, magic tricks, palmistry and physiognomy. While widely known and practiced by simple country folk and gentry alike, such arcane practices (culturally associated not exclusively, but especially with women) were frowned upon by the philosophers and administrators of 18th century Enlightenment: indeed, "under Catherine the Great dream interpretation was made a criminal offence, together with various kinds of magical practices and witchcraft" (Ryan/Wigzell, p. 666). The survival of so copious and wide-ranging a manual clearly designed by and for a practitioner rather than a theorist is highly uncommon.

Some duststaining and fingerstaining from extensive use. Moveable volvelle discs appear to be lacking from two additional circular diagrams. Handsomely rebound in the 20th century.

Provenance: front matter has ink stamp (ca. 1800) by R. D. Combe, a Westminster gentleman whose library was dispersed in 1821 by Saunders of St James's Street. Latterly in the library of the noted Russian-American photographer and biologist Roman Vishniac (1897-1990). 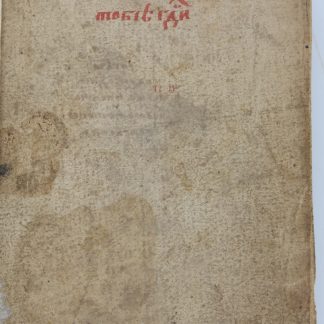