First collected Latin edition of the astrological works of Abraham Ibn Ezra. "A versatile genius with a charming Hebrew style, Ibn Ezra disseminated rationalistic and scientific Arabic learning in France, England and Italy [... He] wrote a number of astrological works (Steinschneider lists more than fifty) that were very popular and were translated into many languages. Two were printed in Latin in 1482 and 1485, respectively; and all of them appeared in Latin in 1507 [...] They are rich in original ideas and in the history of scientific subjects" (DSB). "Of an eclectic bent, he inclined towards Neoplatonism and does not entirely disavow astrology [...] Ezra had considerable knowledge of astronomy, and he produced numerous horoscopes and chronological calculations" (cf. Jüdisches Lexikon II, 526f.).

Born in Tudela, in Moorish Spain, Ibn Ezra traveled extensively throughout the Middle East, and had a great outpouring of written works after about 1140, comprising poetry, commentary on the Torah, works on Hebrew grammar, philosophy, and science. His scientific works on astrology were written when he lived in Beziers, France, between 1147 and 1148.

Provenance: Bound in the later 19th century for Robert Loyd-Lindsay, 1st Baron Wantage (1832-1901), co-founder of the British Red Cross, with his arms stamped in gilt to both covers. Subsequently acquired by the Danish-born astronomer Johan Ludvig Emil Dreyer (1852-1926), long established as an historian of science in Ireland and later at Oxford (his bookplate to the front pastedown). Latterly in the library of the noted Russian-American photographer and biologist Roman Vishniac (1897-1990). 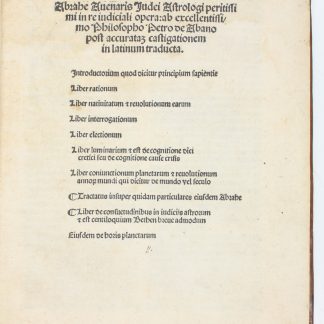