First illustrated edition of the first dedicated anatomy book. "The first modern book devoted solely to anatomy [...] Mundinus re-introduced human dissection, which had been neglected for 1500 years before him; he was the most noted dissector of his period. The medieval anatomical vocabulary, well set forth by Mundinus, was derived mainly from Arabic" (Garrison/M.). Mondino de' Luzzi, professor at Bologna, is considered the founder of anatomy in the Middle Ages. His treatise remained popular until the beginning of the 16th century and appeared in multiple editions.

"The subject of anatomy was not taught either by lectures or by dissection in the universities at the middle of the 15th century. An occasional 'anatomy' was held, but the neglect of the subject is well illustrated by the absence of anatomical books. There is only one in the list, that of Mundinus [...]. Mundinus was a professor at Bologna from 1306 to 1326, and was the first to teach anatomy from the subject, usually the corpse of a condemned criminal; but there is the record of a procedure in 1319 against four medical students for body-snatching. His 'Anatomia', written in 1316, was for two hundred years the popular text book" (Osler).

The work "met a need universally felt just at that time and commended itself for its brevity, conciseness, and completeness, as well as for the fact that it taught for each separate organ the necessary anatomic technique" (Choulant, p, 88). The title woodcut shows a man on a chair, "with coat and high cap, in his left hand an open book, on the left side of the picture a rock and six linden trees, below, on a table, a dissected cadaver, beside its left foot lies a curved knife, to the right of the cadaver stands a young man in a short garment, bare-headed and with long curls, grasping the intestines of the cadaver with both hands" (p. 93). 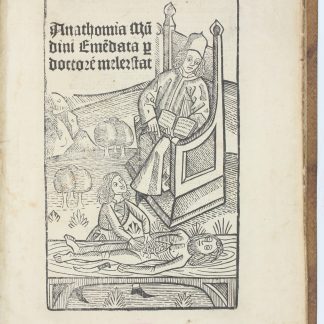