Unrecorded variant of the 'rara avis' of Darwin bibliography: a proto-first issue of the second edition

Darwin, Charles. On the Origin of Species by Means of Natural Selection, or the Preservation of Favoured Races in the Struggle for Life.

Almost unobtainly rare revised issue of the first edition, or rather the intermediary stage to the first issue of the second edition, called by Darwin himself "only a reprint [with] a few important corrections". Published in January 1860, this is the only known copy to retain the year "1859" on the title-page, the original two quotations opposite (while the second edition is usually marked by having three), and the 32 pages of ads at the end, dated "June 1859" (usually lacking in the second edition). Alterations between the first and second editions are minor, though it is notable that Darwin corrected the misprint "speceies" on page 20 and shortened the "whale-bear" story on page 184.

Immediately recognized as revolutionary and controversial, the "Origin's" small first edition of only 1250 copies sold out on the first day, and by the late autumn of 1859 the publisher Murray was asking Darwin to begin revising at once for a new edition. This was to become the second edition (never so called on the title-page), of which a few copies were printed that retain the date "1859". Freeman knows of only two, at Yale and the University of Southern California, LA, both of which, however, already have three instead of two quotations opposite the title: "The existence of such copies has long been known to the trade, although, from their extreme rarity, few booksellers can ever have seen one" (p. 77). Freeman clarifies that while there is "only one issue of the first edition" of the "Origin of Species", "the text being identical in all copies" (p. 75), it was "customary, for many years, for anyone offering a copy of the first edition to describe it as 'first edition, first issue'", and he admits that "the book-sellers were, in a purist sense, right; the new printing was from standing type of the first edition, although with a considerable number of resettings" (p. 77). By this standard, the present specimen is clearly one of the second edition. Yet Freeman, from his evidence, considered "the presence of two quotations only, from Whewell and Bacon, on the verso of the half-title leaf", to be "diagnostic" of the first edition. Unknown to Darwin's bibliographer, the present revised version sits between the first edition and the first issue of the second, exhibiting characteristic features of both. Only a tiny number of copies of this proto-first issue of the second edition can have been produced: it appears a unique variant of what has always been considered the "rara avis" of Darwin bibliography.

Lower and right edges untrimmed, a very short tear in the diagram's first fold; an old repaired tear to the gutter of the following leaf and some very light foxing to the margin of the preceding one. Otherwise an impeccable copy, bound in the mid-20th century for the American petroleum geologist Dr. Edgar Wesley Owen (1896-1981) with a posthumous exlibris ticket loosely inserted. 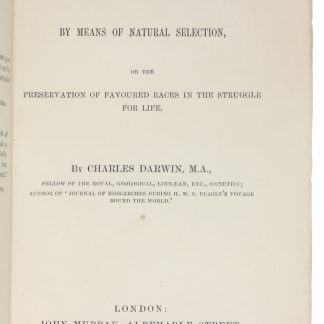