A beautifully crafted album comprising seventy portraits painted by a Turkish artist in colours, gold and silver, illustrating the various offices at the Ottoman court, people of various occupations, different ethnic groups, and their traditional costumes. Most of the portraits are accompanied by captions inscribed in Osmanli at the bottom of the page. One of them, representing Sultan Mehmet IV (1642-93, ruled 1648-87) on his throne, has in the lower part an inscription in French, "Mehemet Grand Seigneur / 1660" (no. 67). Among the further subjects depicted are Janissaries, a porter (hamal), a davul player, messengers of the court, the bearer of the Sultan's sword, women adorned in various costumes, and foreigners.

Albums of this kind were known as muraqqa': compiled from various sources, they were often created to order, by or for Europeans, as gifts to members of Western embassies or as travel souvenirs. European courts appreciated them as valuable sources of diplomatic information. Several similar examples from the second half of the 17th century have survived, among which one of the most famous is the so-called Rålamb Dräktboken (Raland Book of Costumes), acquired in 1657/58 by Claes Ralamb, the Swedish ambassador to the Sublime Porte, and now kept at the Royal Library of Sweden.

A magnificent survival, handsomely bound by Jean-Eudes Baudrillart of Paris. 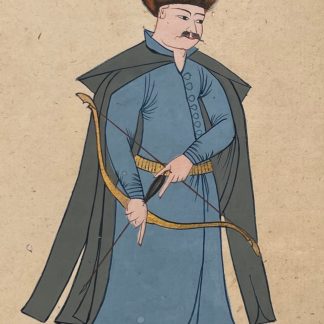