Rare pocket almanac of the Austrian military during the War of the First Coalition of 1793. One of the very earliest Austrian army registers published: the series, which began in 1790 and ran until 1915, was later known as "Schematismus der Kais. Königl. Armee", "Militär-Schematismus" and under other titles. These early army lists are remarkable for the small watercolour samples of regimental colours, reflecting the oft-cited dazzling variety of colours shown by the Austrian uniforms. An important sourcebook for names and titles, including commissioned officers, decorated personnel, military surgeons, etc. Headquarters and districts of recruitment are listed, and a brief history of the French Revolutionary War up to March 1793 is appended. 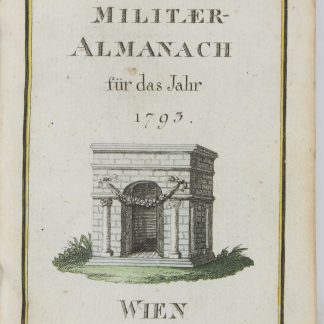